“Iris and I received a completely different message…. A very long one from Mum. Dad is not doing well.”

From August 2016, Iris and I started to notice that Dad was not doing so well health-wise. He was talking and breathing with difficulty and he was often tired. He said nothing was wrong. He had just been working too hard. He really needed some vitamin D again. We insisted that he should go and see a doctor anyway. He promised to go after the planned holiday in early December.

Last year around this time our parents were flying to Lanzarote for a well-deserved short holiday. This will probably do him well, I thought. During the holiday, Iris and I received a daily update about the wonderful holiday and the beautiful weather. How nice for them! The day before they would come back, Wednesday morning, however, Iris and I received a completely different message…. A very long one from Mum. Dad is not doing well, he has been in hospital since the third day of our holiday. She had pretended that things were okay by using both their phones to send Whatsapp messages because she did not want to worry us, hoping that Dad would soon be discharged from the hospital, but that was not the case.

Of course we were very shocked and immediately asked her if we should catch the next plane to Lanzarote, but it wasn’t that bad, Mum thought. We stayed closely in touch that day, but after her hospital visit Mum said it would be better if we came to Lanzarote. Things were going worse with Dad than she thought. The doctors did not know if he would ever leave the island again.

On Thursday morning at 7 o’ clock the plane took off from Schiphol Airport to Lanzarote. We had booked a one-way trip because we didn’t know how long we would be staying. At the check-in desk, a friendly gentleman asked us if we “were going on a nice holiday trip together” “No”, was our answer. “Oh, are you going on a business trip then?” “No, we are going to Lanzarote because our father is critically ill in hospital there,” said Iris, trying to control her tears.

When we arrived, we went to the hospital together with Mum. It was a short drive from the park where she was staying, so we decided to rent a car so we could go to the hospital twice a day during visiting hours. We arrived at a small municipal hospital, feeling very tense. Mum went into the room first to tell Dad that we were there. Meanwhile, from the hallway Iris and I waved to Guan, an old Spaniard with whom Dad shared the room.

At first, Dad did not want us to enter. He did not want us to see him like that, he gestured to us. He couldn’t talk, because his face was covered by a large ventilation mask. We entered anyway and waved to him. Staying for a long time was not possible, because he was very tired. We tried very hard to control our tears.

We stayed for a week and during this week, Dad started to feel better. After a few days, we could talk to each other when he was allowed to take off the mask. I think that our arrival and the presence of Mum made him feel better and gave him strength to fight. It was sad to say goodbye, but we knew he would be coming home soon. 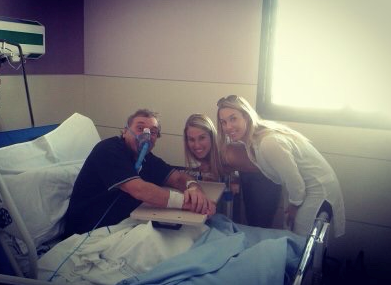 “We tried very hard to control our tears.”

Just before Christmas it was finally time for Mum and Dad to fly back to the Netherlands, accompanied by a nurse. An ambulance took them from Schiphol to the hospital in Leeuwarden, where Charlotte and I were waiting for them. Dad had to lie in a special quarantine room, because he came from a foreign hospital. It took a long time before we could visit him, but now at least he had a “nice” room for himself.

We spent Christmas Day at the hospital and on Boxing Day, it was finally time, Dad was going home! Meanwhile, we had refurbished our parents’ house a little bit. We had moved their bedroom from the attic to the first floor so Dad did not have to climb two stairs to the bedroom.

In the weeks that followed, Dad was doing better and better. After a while, he even went biking again to the surprise of the family doctor who couldn’t believe what he saw when he passed Dad on one of his bike rides. However, it was still not clear what had been the medical cause of everything that had happened recently. Just a double pneumonia that developed on the flight to Lanzarote couldn’t be the cause, could it?

From the moment Dad was back we all went into the medical maze. We went from one hospital to another and from one specialist to the next one. Eventually, in the summer of 2017 we ended up at the ALS centre in Utrecht after one of the doctors had noticed that Dad’s muscles reacted in a strange way. After returning several times for long days of examinations, which we were also trying to change into “fun family outings” by going to a restaurant together afterwards, we received the results on 12 July. A similar muscular disease as ALS had been detected, which could develop into ALS. The name was slightly different, but the symptoms and life expectancy were similar. Even though we had felt this coming, it still came as a big shock. 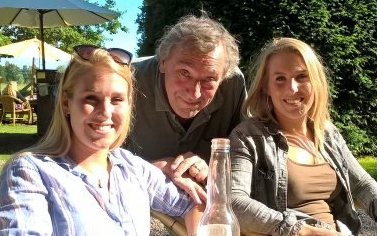 “We went from one hospital to another and from one specialist to the next one.”

In the weeks that followed Charlotte and I were sad. We didn’t know very well how to deal with this news and our feelings, because Dad had actually been given a death sentence. For us, this is how it felt. Shortly after the diagnosis, I saw a man and his granddaughter sitting on the terrace of the pizzeria where I work. I spontaneously burst into tears, because it is very likely that Dad will never have the chance to experience this.

After a while, Charlotte and I decided to turn our sadness into positivity, because what we have always learnt from our parents is that life is beautiful. “La Vita è Bella”. We started to focus on sharing beautiful moments with Mum and Dad and creating good memories. This is something we are still doing today.

Together with family and dear friends (especially Channel Raaijmakers) we started this fundraising website for a treatment that can make our Dad “great again”, as far as possible. Doing this together is also a wonderful experience in itself!

We, Iris and Charlotte, would like to thank everyone who supports us in our joint fight against ALS. Don’t give up hope as long as there still is an option!

Lots of love from